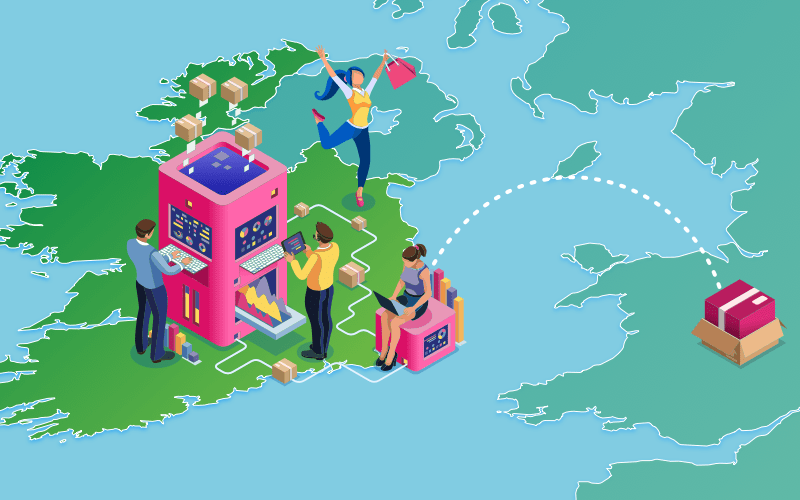 It’s now 12 months since the UK’s withdrawal from the European Union took effect.

In the year since, there’s been widespread uncertainty – a situation not exactly helped by the continuing Covid pandemic.

Nevertheless, signs have begun to emerge as to how Brexit has impacted on commercial relations between the UK and one of its most important global trading partners: the Republic of Ireland.

Equally, it’s becoming clear that some solutions – such as an automated customs clearance platform created by COLL-8 Logistics – are proving particularly adept at helping companies clear the obstacles which Brexit has thrown up in order to continue trading with their Irish customers.

Discussions about the Christmas peak parcel season and anxieties relating to the possible imposition of fresh measures to limit the spread of the virus obscured the publication of two illuminating tranches of information.

At the start of December, the House of Commons’ Library issued a report making clear how Brexit had started to affect trading even before the formal separation from the EU was complete.

It spelt out how the total value of exports from the UK to the EU during 2020 was £42 billion less than the year before.

That reduction was even more pronounced in the first few months of 2021: the value of goods shipped to the EU fell by a staggering 45 per cent.

A fortnight later, the UK’s Office for National Statistics (ONS) issued the results of a survey of businesses in a variety of sectors regarding the consequences of Brexit.

It concluded that the number of companies facing export challenges had more than trebled since withdrawal from the EU.

More than 40 per cent cited increased transport costs. More than half reported having to deal with additional paperwork. One-third were experiencing financial issues due to the new arrangements for customs duties, while a further 20 per cent said that border checks were taken much longer than they had previously.

The result of all that has emerged in record-breaking figures just released by the Irish Revenue.

During 2021 – and even without the full implementation of all the terms of the Brexit agreement – it collected €215 million in customs duty on imports from the UK.

That sum equates to almost half of the total duties collected from all other non-EU markets put together.

It came during the same period which saw the amount of goods exported to Ireland from the UK fell by 45 per cent.

Even so, the administration of the shipments which did take place has increased demonstrably. On one day – the 30th of November last year – the Revenue processed a record 300,000 customs declarations.

Eleven per cent of all cargoes shipped from the UK to the Republic across the year required additional checks to deal with issued arising from that paperwork. A further three per cent required a physical inspection of the goods being transported.

The relevance of that detail is not merely academic.

Just over three per cent of all UK exports involved clothing, with a significant proportion of those snapped up online by Irish consumers.

The very same shoppers racked up £6.04 billion (€7.142 billion) in online orders last year – a rise of seven per cent in a year, three times that of the UK.

Extra paperwork as a result of Brexit is unavoidable but the kind of delays and financial challenges which the Irish Revenue and the UK’s ONS have documented are.

That much is clear from the growing number of retailers who have opted to use the customs clearance system created by COLL-8 Logistics to speed their products into the Republic of Ireland.

In fact, during the same 24-hour period that customs declarations submitted to the Irish Revenue reached an all-time daily high, COLL-8 was handing 34,000 customs forms – more than 10 per cent of the overall Irish total.

Furthermore, it’s a fully automated operation which is almost unique among Irish customs specialists in being able to distinguish between shipments which should or should not be dealt with under IOSS (Import One Stop Shop) rules – and, therefore, are potentially liable for customs duties – and process them accordingly.

Analysis of the declarations handled by COLL-8 shows that more than 99 per cent were pre-cleared successfully before the goods in question had arrived in Ireland, so avoiding any of the hold-ups which can seriously impact the relationship between e-commerce retailers and consumers.

AEO-registered and with its own bonded facility at its Dublin depot, COLL-8 can also help with the swift and accurate payment of any duties which are incurred.

The company boasts its award-winning drop2shop network too, which is available to more than 500 online retailers – including leading British and international brands – and allows consumers to take delivery and return goods bought online.

Considering the official evidence, there appears to be little doubt that Brexit has caused severe disruption and considerable complication to UK companies wanting to further their trading links with Ireland.

However, as COLL-8 has shown, there are effective ways to address those issues and keep the ‘Emerald Aisle’ open to retailers.

Ink-redible: Nobody does Ireland shipments better than COLL-8, says SMP