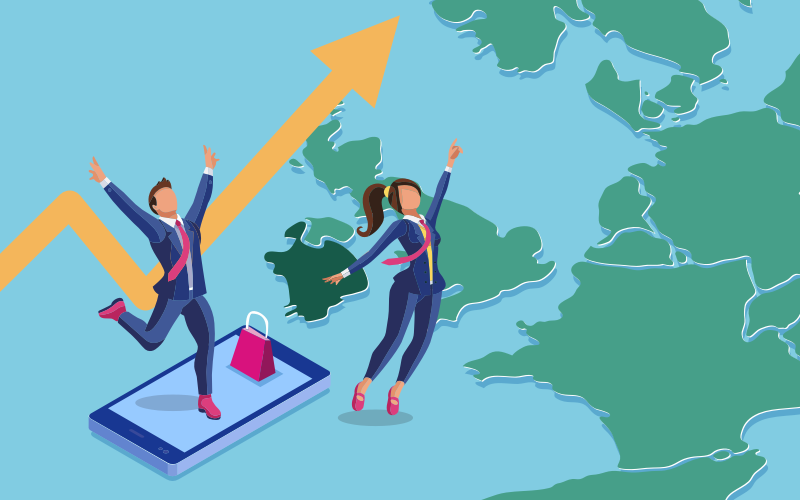 The last two years have taught us some very important lessons.

Businesses and individuals alike have had to learn how to be resilient in the face of great challenges.

That is due, in part, to having seen many aspects of our normal lives utterly transformed.

Among the most notable differences has been an inversion of what passed as the ‘work-life balance’, something which has fuelled a greater reliance on e-commerce.

The latter has been particularly true in the Republic of Ireland.

Headline numbers are spectacular enough. During the course of last year, Irish consumers have racked up £6.04 billion (€7.142 billion) in online sales, a rise of seven per cent in a year – three times that of the UK.

Yet if we look a little closer, there’s plenty of evidence to show that the pattern of online growth is being sustained outside the period in which there were few alternatives for consumers.

They also reveal that despite being one of Europe’s smaller nations in terms of population size, the Republic is now among its leading players when it comes to e-commerce.

January’s retail sales figures were published by the Central Statistical Office (CSO) at the start of this week.

In addition, the percentage of all sales which was accounted for by e-commerce orders this January (which is usually a relatively quiet month for retailers) was equivalent to the period immediately preceding Christmas in 2020.

The data released by the CSO, I should also point out, relates only to those sales registered with Irish retailers.

Irish consumers rack up a considerable number of orders with retailers overseas – in particular, those based in the UK.

In recent weeks, the Office for National Statistics (ONS) has also released its own retail sales figures.

They show that online sales made up just over one-quarter of all retail sales in January, with orders for the kind of fast fashion and footwear items favoured by many Irish e-shoppers generating 23.7 per cent of the total e-commerce value.

Online success is not solely limited to brands in the UK, Europe or the United States.

A report by the European Union shows Irish SMEs leading the way in cross-border e-commerce orders, with 18 per cent selling to overseas consumers – more than double the EU average.

That entire picture indicates that even as the world continues its recovery from the Covid-19 pandemic and returns to a semblance of the home and work lives which we knew before, Ireland is well placed to reinforce its reputation as one of Europe’s most active communities of both shippers and shoppers online.

Ink-redible: Nobody does Ireland shipments better than COLL-8, says SMP